Today, March 11th 2012. 1 year has passed since the great earthquake that shook Japan which pretty much devastated most of the coastal cities on the east region of Japan.

in the exhibition, there are lots of heartbreaking images,

and within those heartbreaking images, there are some which portrays hope.

people who come can leave a message on these cards provided by the staff, and hang them on the sakura tree.

it was very nice to see how people support each other, how some messages can become a strength for others.

so i took an opportunity to write one. my handwriting was terrible… but i want to write it.

AKB48 held a special Concert to commemorate the day.

At the beginning of the concert,

All members of AKB48 appear on their theater at Akihabara, SKE48 at Nagoya, NMB48 at Osaka, HKT48 at Hakata, and SDN48 who at the time was holding a handshake event, all of them at the same time, asked the audience to stand up, and take a moment of silence for the victims of last year disaster.

i was standing in my room also. i think pretty much everyone who watch this concert online did the same.

after that, all of AKB48,SKE48,NMB48,HKT48,SDN48 simultaneously sang dareka no tame ni.

it was the best dareka no tame ni i’ve ever heard.

many members cried during the concert, as well as the audience i think. 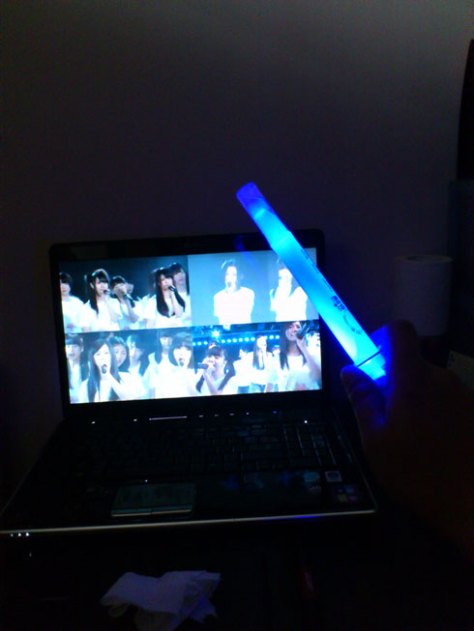 The photo above shows how they broadcast the concert live from 4 theaters simultaneously.

it was an awesome concert. ended by All the members singing Sakura no hanabiratachi.

1 year ago when the disaster happened, i wasn’t an AKB48 fans, but i did what i could, charity and such.

at the time of earthquake, i was constantly chatting with a girl i knew from nico nico douga via twitter, she live near tokyo at that time and was alone at her house. she said that she couldn’t contact her mom who stuck in a traffic jam.

i was worried about her and had a conversation with her for the whole day.

Have you done something that you can do for someone?